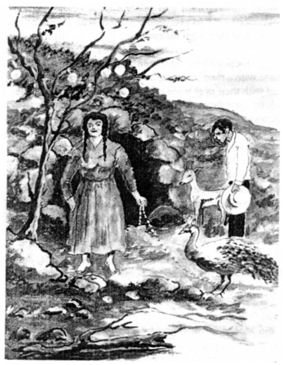 The Stone of Aserri and the Witch Zarate

These occurrences happened in a town called Aserri. which is located 11 miles from de city of San Jose, and is the sixth country of the province of San Jose. It was governed by a well known and handsome Spaniard. And the famous witch Zarate fell madly in love with him. He despited her, and so she swore she would revenge for his hatred towards her.

Days later, the sun rose on the town that turned into stone; the inhabitants turned into forest animals: the proud governor Perez Colma turned into a peacock.

Zarate was a white woman, short, fat, has big black eyes with a fierce and malicious stare. When she spoke, her eyebrows moved frequently and always cackling throughout the conversation. She wore her hair in two braids and even though, her walk was rhythmical and very sure of herself she imposed to everybody her washes, but, also she tended to cure the sick. When she met a sad case, she gave them a fruit basket that turned into precious stones or gold and silver money when they got home.

After the stone spell, that was named Aserri, new pioneers arrived to build their tents, unaware that inside of that stone Zarate lives with the splendor of a sultan from the Orient fairy-tales. At night, she opened the stone and gave shelter to all the animals, including the peacock, which she keep tied with a gold chain.

One day, a man named Diogenes Olmedo, went to visit the famous Zarate to see if she would give him good luck and fortune. After walking for about six hours, he arrived at night to the stone and, tired of walking around without finding Zarate, he fell into a deep sleep. Hours later, he was delusional, looking at a tree he observed two doves looking at him and said: “If you want to speak to the charming Zarate, knock three times on the stone and say the following words: “I’m looking in vain my ideal.., walking forever and always by foot, beautiful Zarate listen and for the love of the peacock open the stone”, then the doves took off and flew away, simulating a path of white petals.

Diogenes awoke …It was midnight; he got up and knocked the stone three times, at the same time the stone lit up, taken an appearance of a floating city in a gold sea and nacre; later he heard the opening and closing of bronze doors, dogs barking and distant laughter. Instantly, the night turned into a clear day, lighting up the countryside in which Zarate appeared, dressed in black, with a shawl on her shoulders. She had a lit cigarette in her fingers and in the other hand a gold chain linked to a peacock. Zarate approached the poor man nicely, who was trembling in his shoes and looked like he was going to witness a tragedy.

What can I do for you good man? How my I serve you.

Diogenes, finding courage got closer to her and greeted her nervously; then he proceeded his sad story: he was a widower, has sick children and no food to feed them, etc.

Zarate, as she was remembering something, thought for a while and then said: 6how long did your wife died and what was her name? He answered, and said: she didn’t die. “It was about two years ago she went for a day with her friends. They went to the mountains to swim in the river, and they disappeared and never returned… “Her name was Lupita Olmedo”. The witch looked closely at Diogenes who began to sob and couldn’t hold back his tears. She got closer to him, took his hand and with a voice with a lot of persuasion, said: “I know who she is… “Then began to move her eyebrows, took a large smoke of her cigarette, and with a laugh that scared to death the poor man, said: I’m touched by your sad story and because you had asked in behalf of my favorite bird, I’m going to give you what you need.” She walked a few steps and invited Diogenes to follow her up to the mountains. The morning was delightful; the peacock, feeling his freedom, stretched out his feathers majestically and let out a happy cry as a greeting to all the beings in the mountain. The trees answered moving its treetops. the goats and the gazelle made happy noises and the birds sang from the top of the trees.

They walked for an hour. Zarate was smoking, and Diogenes wondering about. Finally, they arrived at a plateau with a beautiful lagoon surrounded by bamboos, lemon, and grapefruit trees. Zarate went to a grapefruit tree and taking an amount of its fruits, gave to Diogenes and said; “This is the food for your children”. Diogenes opened the bag and put it inside. At that moment a group of doves landed over the bamboos. Zarate counted them, there were twelve; and then said: “You can go now, these doves will be your guide”.

The poor man returned home, sad and disappointed, taking the heavy burden of the grapefruit, and in his soul the promise of a flirting and repulsive woman. Why take so many fruit and useless words?

Diogenes reached halfway and the weight of the fruits started to get him tired, at the end of the road, it was a precipice: so he opened his bag and six big grapefruit started to roll by the precipice.

Happy with less weight, Diogenes continues his walking from the mountains and soon arrived home. His sons were very happy to see him and asked him many questions about Mrs. Zarate. Diogenes pretending happiness told them that she was sending some grapefruit to enjoy, and the next morning doves will arrived twelve beautiful with a nice surprise. The children went to sleep that night thinking to get early in the morning and play with the grapefruit and catch the doves.

The next morning they awoke, and they found the grapefruit turned into solid gold spheres, and later on Diogenes and the children heard the barking of dogs and galloping of horses and feminine voices. And what a surprise to see twelve of the peasants that one morning when happily to the mountain and didn’t came back. Lupita Olmedo was the first who jumped off the horse and went into her children and husband arms. And she said that Zarate seeing them swimming in the river turned them in twelve white doves that will form her court of honor. About the peacock, she has a promise that in the moment he wants her to be his wife, she will returned him into a man; but, the honorable Spaniard choose to be peacock, than the husband of a witch.

The stone of Aserri and the charming Zarate, ends here, which leaves between the stone enchanted and love not corresponded by the man she loves, she was in fact a good woman, who practices charity with others in need. and to put her name as nobody had, because, the legend immortalizes her from generation to generation, and tells her story and bless her name.

Also, I invite you to visit this nice country, and you will be enchanted by it. Visit the stone, and why not knock three times, and said the words: “For the love of the peacock, listen and open the stone”.

Zarate, will give you an answer to your questions and strength to find other alternatives.. May be a grapefruit….