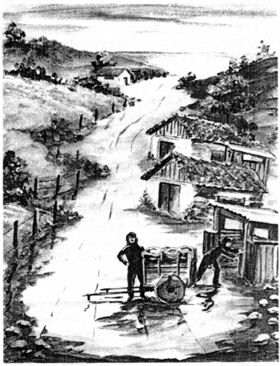 This particular period of time carried its own problems The new leader, who had a number of arrests, wants to leave a marked and innovative course. The reward for doing these was the respect of his people who followed his orders, trusting his ideas for the good of the commonwealth.

San Jose de la Boca del Monte (it was the first name of the City of San Jose) had to be built – under the new leader rules – in the strongest city of the new Republic. Of course this would not be possible if its inhabitants continued to wander the valley. That kind of living feels at ease without relations between each others, due to the selfishness and greed of the landowners! The saying to justify-‘ was: «Everybody in their houses and God in all of them»; and because that belief that seems uncivilized, feed on a sick freedom, denying all solidarity and strong cohabitation. The liveliness that all people need is to be progressive, productive and caring for the progress. This issue had to be inverted.

Soon, after he showed his strong directing side, the leader started to realize how San Jose de la Boca del Monte showed its firsts organizational signs that will lead them to a modernized city. And this was accomplished by the ruling of an intelligent, fatherly leader Although, the government was undeveloped, it offered the necessary bases to carry out the innovative project of making a city. How it could not be possible to fall into temptation of acquiring the necessities to make life more pleasant9 Those first pioneers, who were used to fight the adversity of an unattended colony of the Guatemala Kingdom, started to feel the necessary human heat to get rid of the segregation, which made life difficult for them.

One lovely morning, in an Open Meeting, the neighbors decided to come down from the hills in order to fulfill the leaders orders. It was not liable to oppose his commands, so they did it gladly.

They started by dividing the land into blocks to make enough land to hold four families.

Immediately, they started c»La Fiesta del Barro» (mud Party) in order to build a well based and spacious houses made of sun-dried clay brick. The city was boiling with enthusiasm and hardworking; some were cutting and carrying wood from the mountains, others were churning mud with animals, and the smartest of them were knitting fabrics. And what about the ovens, that were built for common use by the women and getting ready to use*7 Some were cutting different kind of grass to give to the cattle and biscuits for everybody to enjoy.

In less than a year, those hard working peasants were enjoying a nice house with milking houses and barns to store the season’s crops, as well as small part of land on which the family could grow their own crops and vegetables to sell at the market for a personal income. The laziness they once had, had now been changed into an organized com m unity.

Then it happened that the Mother Nature seemed to test the newly built village, news from up North of the Country arrived announcing a plague of cholera creeping towards the village.

The alarm was in the village; at once, Juancho Pacheco went house by house in order to call to a meeting in Eduviges Brenes’ house.

As it was expected, Juan de Dios, known as «Juancho», an active and well spoken person, showed enough enthusiasm to motivate the people.

‘See here my friends, I did not know about cholera… that sickness had taken too many lives in the 56′ war that were produced because of unsanitary conditions. And this was told by Gomez just before he had come from North called by the government. And this is not a story telling; he seems to know about that because he comes from an European University. «Do you know who his father is? Don Paco Gomez, is he with us? I would ask don Paco, he knows more of the matter than me, have a word with him and tell everybody the news. Because he was not here! It seems that he was sent by Lajuela (Alajuela), where the things are very bad, and has a lot of deaths already. And we are here, so ignorant and without any worries of the business and with all this sickness around us. Is better to let don Paco tell us about the matter’

‘Good evening and thank you all for being here tonight, and thank you Juancho, who was very concerned. ! While talking to my son, he told me that we should do something very’ soon, because the unsanitary ways of lifestyle we use among us is the cause of this terrible disease. But we should learn about better way of sanitary ways and have potable water in our homes to wash our hands and clean our vegetables, we could fight this disease. We must do something very soon.’

‘So, what should we do’ Don Eduviges asked?

‘Get together with the educated ones’ suggested Juancho., ‘if you let me do it I will ask him to tell me what we should do.

‘We are with you!’All of them said, and the meeting ended.

The next day, early in the morning Juancho went to look for Dr. Gomez, who received him very warmly.

‘Doctor’, I have come to ask you for your help in order to convince the village folks to clean up and fight the cholera epidemic. They will do whatever you say, and you already know our lifestyle… Filthy! Filthy! ; OK? And it is a good idea, one of the activities has to begin through education, a neighborhood Committee must be organized. No time to waste, because the piping from the government is coming any minute and we have to install it. The water is the main thing for our health. And we must clean up the town im-. – mediately.’

‘And who do you think could do the job? I don’t know, you are in charge, you must find that person.

Juan de Dios, without loosing his time and as Chairman of the Health Committee of San Jose de la Boca del Monte, started to create the committee with really quick success, with the help of the Cubillo family and others. And he explained the job to be done, as cleaning toilets and other tasks.

Daniel, the eldest asked ‘How do,you expect to do such a job Juancho?

That is easy – Juancho said- look; you put an extra compartment on the cart soit can easily fit six barrels. And with a rope you start to take out all the crap from the bottom of the holes and put it into the barrels. Then, because you don’t want to be seen, put on black clothes that cover your heads and then, between two, pull the cart to the Virilla River an empty the barrels and that will take care the mess.’

‘Seems OK’, Miguel said, ‘but, what about the smell? I can feel sick in my stomach just thinking about it!’

That can be easy fixed, Juancho reassured them. If you start the job after ten o’clock at night, when they are all asleep, no body will see you, not even when you take out the muck from their holes in the garden. Anyway, it’s a secret that will be kept with me.

Then the job was started. The town folks were overjoyed to see their tanks empty in the mornings, but at the same time, the town was horrified by the occurrences during the night. After the lamplighter put out the lights, the whole town was left in a scary situation, because of the horrifing darkness. In the mornings, people told stories about how the chickens had been stolen, the nests were ransacked and pigs were slaughtered. And to everyones surprise, the girls were mysteriously getting pregnant and people were saying that it was the Holly Spirits job. Blasphemy! they were saying. To complete the story, the browe ones who dared go on a spree, come back late to their homes, appeared speechless and without sight. They all swore that they saw an ox less cart leaving the «crime scene».

And so many times this story was told, that people stared to believe that the town was haunted.

«YES», said my grandfather, after hearing the story, «my grandfather told me this story too, but he told the other part that nobody knows. The children that were born from those unfortunate girls mysteriously pregnant over night were in fact members of the Cubillo’s family. They were about one hundred in total, so for the next hundred years. The Cubillo’s family made up one third of the population without know-‘ing their sons secretly committed these «crimes» when finished their jobs of emptying the septic tank of the town. How about that9?