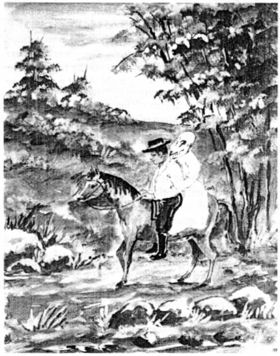 A peasant was walking with me. He had a healthy soul that he had been able to maintain, with all its purity and simplicity. I love pure souls and I take pleasure in penetrating them, so I listened closely to his conversation and only interrupted to ask questions. There was no breeze through the trees, nobody was on the road and the majestic silence ruled the starry night. All of a sudden we heard the galloping of a horse.

“Someone is coming.” I told my partner to put in practice his country man’s ear.

Surely and convincing he said “Not on this road, it’s going up the next road.”

I hadn’t got the words from my mouth, when suddenly the galloping stopped. A few moments later the galloping started again, but wasn’t rhythmical like last time, there was something strange about it.

In a quiet tone of voice, almost superstitiously respectful the man whispered to me “That rider has encountered “La Cegua”, but do not fear my friend, because there are two of us and because we are walking, she won’t come near us.”

“La Cegua?” – I asked with interest. “What kind of animal is that?”

It seemed to me as if a smile appeared on the lips of the man as if my ignorance amused him.

“But, Sir! How is it possible that you, who reads a lot, does not know about “La Cegua”? It is the devil itself, and God help you if run into her.”

“I assure you that I do not know, explain it to me.”

We were very near our destination and the dogs could smell us. They started barking, not menacingly, but in a friendly welcoming way. The stars lit up the night and it seemed like one of those fantastical landscapes you see only in books.

“No soul has remained the same after seeing “La Cegua”. Strong men, healthy, happy, joyous, hard working men, have change completely. Some even die out of fright.” Then he began to name a list of a few people he knew that has lost their life to this terrible apparition.

“It’s not easy to see her. She goes everywhere, in particular places mostly. Around here she appears a lot, that is why you will never see a rider by himself, there is almost always two riding together.”

“Is it possible that she can be seen by two?” I asked.

“Only when we are by ourselves she approaches us– he replied happily, because he knew I had been listening with a lot of interest.

“In some places out of the town’s limits, where there are a lot of bushes and trees along road, is the usual spot where she likes to surprise the passing riders. She appears in the middle of the road, and with a very sweet and weak voice she says: “Kind Sir, I’m very tired, and I’m on my way to see my sick mother, would you be kind enough to give me a lift to…” And she gives the name of the nearest town, because she is the devil itself and knows everything”.

“Then, it is a person, or has a person’s characteristics?”, I dared to ask again.

“She is a very pretty young girl, with big black eyes, curly hair and a beautiful mouth. Everyone who looks at her falls under her charms and feels very sorry for her because they can see the tiredness in her and her weak little voice.”

At that moment a gentle breeze started to make the leaves move that created shadows all around and then brushed the path ahead of us, as if some invisible mischievous force was moving ahead of us. Mother Nature was helping the narrator create the effect he wanted.

“Not even the most cold-hearted men can resist her charm. Some take her on the back of the saddle, but most prefer to take her on their laps. To her it is the same thing. When they start to move, if she in front, she turns her face; if she in the back, she makes the rider turn around backwards. And then comes the very scary thing; the beautiful woman disappears, her face looks like the skull of a horse, fire comes out of her eyes. She opens her mouth and shows her huge, yellow, horse-like teeth and lets out a horrible putrid breath. At the same time her arms like iron hang on to the rider. The horse seems to know what is happening, it takes off in a crazy gallop trying to get rid of the monster.”

“And then what happens?”

“Then the men who have picked up the girl, and of course with wrong intentions on their minds, are later found dead with their eyes wide open in fear and with a horrible look on their faces. The others, as I told you before, live but serve out the remainder of their lives uselessly.”

And then, the weakness of the body, the soul, and perhaps death? So, “La Cegua” is a story used to scare young men into doing the right thing and keeping their minds pure.